You Say You Want A Revolution?

Small business, as they say, is the engine of our great economy. Unfortunately, in recent years, that engine has run low on fuel. Startups and emerging growth companies have seen their options for access to capital slowly disappear over the last 20 years. Banks no longer loan to small businesses, government programs are sparse and investment banks will only finance Fortune 100 companies.

Even with relaxation of the direct solicitation rules under Rule 506(c), small companies still face the challenges of raising capital without the requisite reputation to attract wealthy, accredited investors — such as angel investors or venture capitalists.
Seeking to address the void in small business capitalization, Congress passed the JOBS Act in 2012, and since that time we have seen a number of initiatives from the SEC enacting the law.

On March 25, 2015, they implemented section 401 of the JOBS act known as Regulation A+, or “Regulation Crowdfunding”. As a result, companies could raise capital through a more streamlined registration process, allowing companies to raise up to $20 million (Tier 1) or $50 million (Tier 2) per year from the general public.
More recently, on October 31, 2015, the SEC announced the passage of the long awaited rules under Title III of the JOBS act, and in so doing ushered in a new era of small business finance. The new rules — set to take effect in May 2016 — will allow companies to raise small amounts of money from all investors, large or small, by general solicitation via the internet or social media. The caveat is this offering must be done through an SEC registered “crowdfunding portal”.

“These new rules provide an effective, workable path to raising capital that also provides strong investor protections,” said SEC Chair Mary Jo White. “It is important for the Commission to continue to look for ways that our rules can facilitate capital-raising by smaller companies.”
Legion Capital Corporation is poised to lead the way in this burgeoning industry, by leveraging the power of its multi-million opt-in investor database and state of the art crowdfunding platform to create a powerful and enduring financial model.
Legion Chairman and CEO, Jim Byrd, stated: “Congress and the SEC have acted to reignite the capital formation process for small and emerging companies in America. The JOBS Act and crowdfunding initiatives will revolutionize the financial services industry. For too many years, corporate finance has been the exclusive province of the Wall Street banks and the ultra-wealthy investor. Now, for the first time, every company has the chance to finance their growth through the power of crowdfunding, and the average investor will have the chance to access early stage private offerings and IPOs. This is truly a landmark event in the history of American capitalism.” 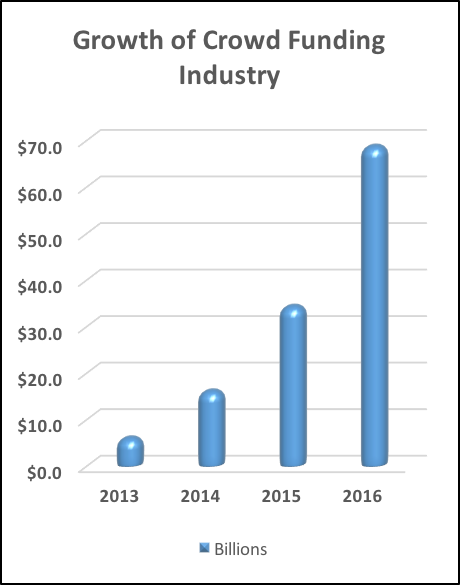 Crowdfunding is already a vast and rapidly expanding industry. According to a recent Report by crowdfunding industry analyst Massolution, global crowdfunding experienced accelerated growth in 2014, expanding by 167% to reach $16.2 billion raised — up from $6.1 billion in 2013. In 2015, the industry was set to more than double once again, on its way to raising $34.4 billion. According to the same report, as highlighted in Forbes magazine, crowdfunding is set to eclipse the entire venture capital industry by the end of 2016!
Legion Capital is poised to become an early leader in this exploding industry, and intends to be the gold standard among the new breed of financial services companies.

The revolution is upon us…

About the Author: James Byrd is the CEO of Legion Capital Corporation, a direct to market venture, crowdfunding and advisory firm specializing on small business growth and capital formation.